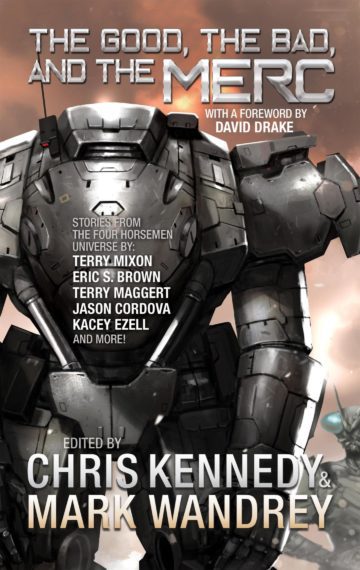 Even more authors and stories. Still the same bestselling universe.

It’s the Twenty-Second Century. Humanity has taken its first steps into the galaxy, and we’ve found ourselves in a vast playground of alien races, environments, and cultures. As the newest players on the universal stage, though, our position is readily apparent—we’re at the bottom of the food chain.

Welcome back to the Four Horsemen universe, where only a willingness to fight and die for money separates Humans from the majority of the other races. While some of the stories inside deal with mercenaries, others introduce readers to the other guilds, organizations, and races that make up the landscape of the Four Horsemen universe, as well as providing additional insight into the characters of the mainline novels. What’s it like to be a medic on the beach or to learn how to kill from a mother not your own? Come find out!

Edited by bestselling authors and universe creators Mark Wandrey and Chris Kennedy, “The Good, the Bad, and the Merc” includes sixteen all-new stories in the Four Horsemen universe by a variety of bestselling authors—and some you may not have heard of…yet. In a galaxy this big, you’ll find that some of the races are good and others are bad, but only the best are mercs!

Foreword by David Drake
Argonaut by Kal Spriggs
Shell Game by Terry Mixon
The Last Dragon by Terry Maggert
Hero of Styx by T. Allen Diaz
The Beach by Philip Wohlrab
Velut Luna by Christopher L. Smith
Keep the Home Fires Burning by Jason Cordova
Vvremya by Mark Wandrey
The Last Guardsman by Stephanie Osborn
Unto the Last–Stand Fast by Robert E. Hampson
The Demon of Ki-A by Eric S. Brown
Under the Skin by Marisa Wolf
Inked by Mark Wandrey
Angels and Aliens by Jon R. Osborne
Life by Chris Kennedy
Lessons by Kacey Ezell