My friends, I cannot tell you how excited I am. This Friday, 7 Jun 2019, THE WORLD ASUNDER, Book 2 of The Psyche of War goes LIVE!

This is the story of Adalina Sucherin, a German psychic living in post WWII Berlin. Surrounded by destruction and strife, she’ll have to trust an enemy in order to figure out how to put the pieces of her sundered world back together again.

I hope you consider checking it out, and if you like it, I hope you’ll leave a review. Initial feedback from the launch team has been positive, so here’s hoping the general public feels the same way!

PLUS! THE WORLD ASUNDER is eligible for The 2019 Dragon Awards in the category of Best Alternate History. If you read my book and like it, I’d love it if you’d consider nominating it in that category. And if you’re looking for other suggestions for fantastic books to read, my amazing publisher Chris has a list here:

It’s the return of Operation Tiamat! The nomination form is live..and you need to vote! Who is CKP nominating from our releases this year? These:

Whoever you vote for, please vote! You can do so here: Dragon Award Nomination Form

Please nominate! Fan awards are nothing if the fans don’t vote! 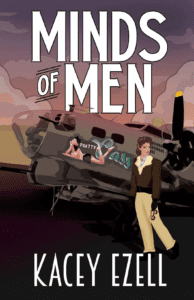 I just got a terrific review of Minds of Men, from the fabulous Jimbo’s Awesome Science Fiction and Fantasy Book Reviews, and I wanted to share it with you, my friends.  🙂  Here’s my favorite part:

It’s umm… Alternate history. And I’ve got a history degree. And if one of my old professors were to find out that I read a book that they’d consider to be historical fiction, I’d be in deep doo-doo. If they found out I enjoyed it, I’d be in even deeper doo-doo. And if they found out I featured it on my blog and encouraged others to read it, I’d get to find out if it was possible to impeach me and take my degree away. So, I mean, yeah, Minds of Men kicks ass, but if you talk to any history professors from Oakland University (where I got my BA) especially, or Wayne State University (where I did some graduate work but never finished) then you didn’t hear how good this book was from me. K? I mean, you can still say you read and enjoyed it if you don’t mind the inevitable backlash. Just don’t tell them it’s my fault. I’ve got kids.

HA!  Thanks Jimbo!  🙂  I really appreciate it.  He actually goes on to leave a pretty in-depth review of the story.  You can check out the rest of it here.

And if you haven’t yet picked up a copy of Minds of Men, what are you waiting for?  We even have it in audiobook now!

You guys.  Seriously.  So many good things are happening right now that my head is spinning!  So here’s an update post with a lot of super great news and fun stuff to check out.

So, without further ado:  Thing The First! 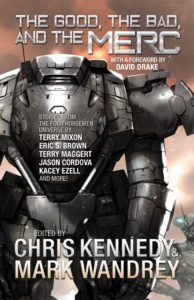 The Good, The Bad, and The Merc edited by Mark Wandrey and Chris Kennedy is LIVE today on Amazon!  This third anthology in the bestselling Four Horseman Universe (4HU for short) contains 16 short stories written by 15 authors and continues to flesh out the amazing setting and story laid down by the previous anthologies and novels in the series.  Fans of the series will be delighted to find a story featuring Jim Cartwright, from Cartwright’s Cavaliers (the incredible first book in the series), two catsassin stories, and offerings from Rob Hampson, Christopher L. Smith, Jason Cordova, Marisa Wolf, and Phillip Wholrab’s breathtaking debut story.

Do yourself a favor and click here to pick up a copy of The Good, The Bad, and The Merc, and then if you haven’t already done so, dive in to the rest of the 4HU with Cartwright’s Cavaliers and A Fistful of Credits.  If you enjoy fun, fast paced military sci-fi, you won’t be sorry.  I promise.

Minds of Men is doing great!  Thank all of you so much for your support, either as launch team members, early reviewers, Facebook post sharers, word of mouth talkers, or whatever other role you’ve played.  I cannot tell you enough how much I appreciate you all.  We’ve enjoyed steadily growing momentum from the beginning, and I would love it if you would continue to share, support, review, talk it up… all the things you’ve been doing. 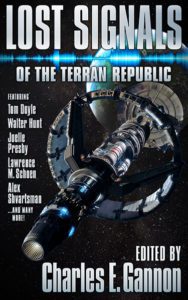 And now, an announcement!  3-Time Nebula Nominee Chuck Gannon is running a Kickstarter campaign to fund an anthology set in his Caine Riordan universe.  I could try to wax eloquent about it here, but there’s no way I’m going to beat Chuck’s own beautiful prose, so I’ll settle for linking the Kickstarter page here.

But here’s the really exciting part (at least for me!)  I’ve been announced as a stretch goal contributor!  That means that if they meet their first stretch goal, I’ll be invited to contribute a story.  Because I really, really want to write in Chuck’s amazing setting, I’ve agreed to sweeten the pot with some redshirt and cast member opportunities as backing rewards.  🙂  So if you’re dying (see what I did there!) to show up as a named character in my upcoming 4HU novel Assassin, please go check out the Kickstarter campaign, and consider backing it!

As always, thank you all for your love and support.  I couldn’t do any of this without you.  You guys remain the best.